I’m back again, this time to elaborate on my love for Beverly Hills, 90210; the original. It is safe to say that I am addicted to this show. It all started with me watching reruns of later episodes (much later, like the last few seasons) on SOAPnet before I would go to work or when I got home for work–and I got sucked in. Mostly because I have become disturbingly fixated on Luke Perry’s character Dylan. He’s so brooding, guarded, deep, but somehow manages to be warm. The writers sure did me a solid with this Dylan character! So someone donated the first season of 90210 where I work and I seized my opportunity and I haven’t looked back since. Literally, because I am so mesmerized by this show, I have no time or interest for anything else.

Last post I included the opening credits to Season one, which are frankly, classic. I watched it along with every episode–normally I’ll fast forward right through it. My favorite part is when Dylan is on his surfboard shouting something–it’s hot. I LOVE IT. I shout out, “oh my god, I love it!” at least twice an episode. The first season is amazing, if you want to see television at it’s finest, I am recommending the first season of 90210. They managed to cram so many issues in to it and also have it wrapped up in a nice little package in 45 minutes.

They were able to cover both drug use and alcoholism in one episode with Kelly’s mom–by the end of the episode she was off to rehab and practically clean. They also hit on teenage alcoholism with Dylan’s character–who struggles with this problem for a couple of episodes–especially in the second season when his mom moves back to town. Also dealing with teen alcoholism is Brandon, who apparently gets drunk and addicted after one drink and then goes out and drives, totals his car, gets arrested, swears off drinking, and at the end of the episode, Dylan takes him to an AA meeting, which oddly enough is held on their high school campus and is full of teenage alcoholics. We can’t forget date rape! This is covered in both season one and season two. In season one, there is a teen hotline that kids can call to talk about their problems and this girl keeps calling and talking to Brenda about how she is basically being raped by football players after every game. Brenda tells her it’s not her fault, but that’s not enough, she has to find the girl! Which is against probably any anonymous hotline policies, but she finds her and freaks the girl out from calling again, but Brenda knows what is up and calls the police and has them hide in the bushes near the parking lot because she knows that these football rapists are going to strike again at the same time and same place and they do! And they are arrested. Sweet justice! In the second season, it is Kelly who accidently gets herself into a sticky situation at a Halloween party by wearing a provocative costume. Some low class a-hole dressed as a cowboy thinks that just because she is dressed seductively, she is asking to be sexually assaulted; we the viewers learn a valuable lesson that this is not the case–you have the right not to be attacked no matter how slutty your Halloween costume is.

Losing your virginity to Dylan McKay is also covered in the first season. I took notes; because if I had a time machine you can bet that I’d be setting that thing for 1990 and getting myself on that show!

Season two brings us new opening credits. I love this one almost as much as I love the first season opening. I especially love the part where they are trying to pass off some surfer who looks nothing like Luke Perry as Dylan surfing; it is so obviously not.

In season two Brenda breaks up with Dylan–because she got all scared when she thought she was pregnant she needed to slow things down. I can tell you one thing, I would not be slowing things down with Dylan McKay! Boy is fine! So up until episode 8, there is this back and forth thing with them–it’s only ’til Emily Valentine goes on a date with Dylan that Brenda realizes what a moron she is letting a piece of man like that wander free! Brandon eventually starts dating Emily, but she is all cray-cray and slips E into his drink at a club to get him to dance or some shit. Then he freaks out and breaks up with her, but she calls all psycho on him and stalks him and ruins their homecoming float that they built, but Brenda talks her out of setting the thing on fire and she goes to a mental hospital for a while. Brandon’s cute, but he’s no Dylan, come on now!

We also see David Silver’s friend Scott bites the dust and  learn and important lesson on locking up fire arms in an out of the way places in our homes. Homeslice Scott wasn’t too bright and liked playing with guns and he accidently shot himself. It was a little bit sad because not only did he die, so did his career. We also learned that sometimes it’s not a good idea to set out and try to find our birth mother like Steve tried to do. You’ll most likely find out you went to Albuquerque for no reason, because your birth mother died a few years back in an auto accident. The Christmas episode touched me a little bit–I love Christmas and I love 90210 so it was like double fun. There is a magic santa who brings everyone together–including Dylan and his father. Dylan’s emotions are so real! I LOVE IT!

I haven’t finished season two yet, I only have six more episodes left and I am trying to save them, because I’m not sure when my season three dvd that I ordered is going to be here. It is killing me that I am not watching it right now! I have no idea what is making me so cray-cray about this show (besides Luke Perry)–but in some weird, pathetic way, I am really relating to it. Well, I don’t know if relating is the right word, but I am connecting to it. Watching it makes my life feel a little less shitty–if work sucks, which it most always does, I just come home and watch some 90210 and I’m in the early 90’s where people can’t get a hold of each other very easily because they don’t have cell phones and they have to make and effort to talk to one another instead of sending text messages and emails and all that.

It makes me wonder what it would have been like to be a teen in the 90’s. I’m guessing pretty awesome, especially if I went to West Beverly. I also like the fact that the majority of the actors and actresses looked like real people. It’s hard to imagine those same teenagers (or 30 year olds playing teenagers) being able to be cast in a show like this today. Just look at Ian Zeiring: 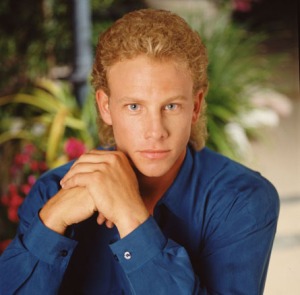 This is what passed for a goodlooking, jock, ladies man, in the early 90s. Also, Shannen Doherty (love her!), today would not be considered your conventional teen t.v. beauty: 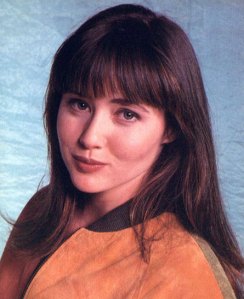 And who could forget Gabrielle Carteris who played Andrea Zuckerman, the resident brain of West Beverly. If this same woman (I say woman, because she was 29 years old when she started on 90210) walked into a casting today, I seriously doubt she would be given even the role of the nerd; we don’t even want our nerds to be believable anymore!

Now I’m going to post a picture of Luke Perry just for fun: 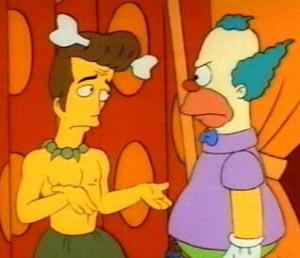 And for some reason, when I watch the opening credits to season two, whenever this part comes on:

I am reminded of this part from the Schmitt’s Gay beer commercial with Chris Farley on Saturday Night Live: 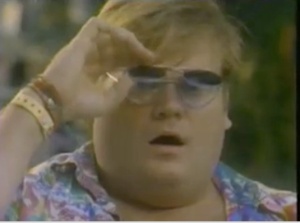 I’ve had 22 episodes to make me think about this. Don’t judge me!