We all have them at some point. It’s the kind of thing that happens, that feels surreal–and it only feels surreal because you spend entirely too much time streaming movies on your Netflix (that’s a whole other post entirely people). I’ve had a few memorable movie moments and really they are only memorable, because they are slightly embarrassing or ended up with some kid trying to grind his knee up in my groin at a high school dance–more on that later. Maybe some of you out there have had them, you might be the lucky kind of people that make a connection with someone on; lets say an airplane; and you never think you are going to see them again, but lo-and-behold, they turn out to be your new coworker or something equally romantic comedy worthy.

I do not have this kind of luck. I never have and I am going to go out on a very short limb here, and say that I probably never will.

Since I am female and this is what females do (or so I’ve been told, by the media), I spend a lot of time romanticizing real life, trying to make it resemble  fairy tales, rom coms, and 80’s teen movies. It’s possible that I have an overactive imagination and just like to make up the occasional story of what it would be like to have a man sweep me off my feet–or it could be the fact that the entertainment industry has ruined me. It’s not fair to blame it all on them, but I will, because not taking responsibility for one’s self is a true American trait, and I am nothing, if not a true-blue American.

The first of my movie moments that I can remember was back in high school. And it went a little something like this….

Except it went nothing like that, because Jake Ryan does not exist, and he does not speak Spanish. Although, how great is it that that clip is in Spanish? It’s almost better in Spanish. But as I was saying, that isn’t really how my movie moment went down. I was at a homecoming dance and I was standing by myself–a slow song had just started. I don’t know if it was the same where you people went to high school, but good lord, our dances were not complete without a handful of slow songs. Now, I think they just play some ‘Lil Wayne song and guys bend girls over and pretend to have sex with them, or actually have sex with them….kids grow up so fast these days. But I digress. So I was standing by myself, twiddling my thumbs or something, and I look up and I see a boy in front of me, clearly asking me to dance, because he has his hand outstretched in front of me and he said, “Would you like to dance?” My immediate reaction in my mind was obviously, “huh?” which translated into me looking behind me and to both sides to make sure there wasn’t some crafty bitch behind me waiting to pop out  and steal my glory. It gets better, because then I POINTED TO MYSELF saying, “me?” I wish I were kidding. But I’m not. So it turns out, he was asking me to dance. As we were dancing, it felt like something was missing…magic? romance? A finger and a half, perchance?! He was missing some fingers.

At least he wasn't able to grab my ass?

JAKE RYAN HE WAS NOT. But for all those fingers he was missing, he sure made up for it in the thigh area, because it was trying desperately to rub up in my groinage area…which I did not appreciate. And the song was like a  year long, I swear it was like were dancing to some extended version of Shai’s “If I Ever Fall in Love”.

So lets move ahead 8ish or so years (editor’s note: I am getting old) and I am still reliving scenes from movies. This time it’s from a movie that I’m ashamed to even admit that I saw…I actually rented it on Itunes. Who does that? Me, that’s who. But not now, now that I have NetFlix–dependable, comforting, NetFlix. The movie: He’s Just Not that Into You. Seriously, I actually watched it. In my defense, Bradley Cooper is really hot, okay? 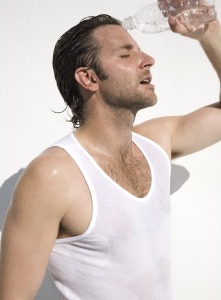 For those of you who have better sense than I do and avoid watching such filth, there is a scene in the movie where Justin Long’s character; Alex; invites Ginnifer Goodwin’s character; Gigi; to a party he is throwing at his apartment. I’m not going to lie, I looked for a clip of this, but couldn’t find it anywhere, and that’s why I am going to have to explain this shit. So Gigi is basically in love with Alex because, well she is a woman in a romantic comedy, and is desperate; needy, naïve;  sort of like a real woman, I guess? The line between art and reality is so blurry. So there are tons of other women at this party because Alex is one of those guys that has lots of women friends (annoying) and doesn’t realize when he is leading a girl on–and then blames the girl for reading too much into the things he has said/done (double annoying). All of these factors do not deter Gigi from basically becoming the party hostess (i.e., pretending to be his girlfriend). She starts refilling chip bowls, going around making sure everyone is having a good time–all while Alex is ignoring her because he is playing video games with some hot model looking chick. She even cleans up the entire apartment for him at the end! Sad, I know. Plus, Alex doesn’t even care.

Where is this all going, you may now be asking yourselves. About a week ago, I was invited to a an apartment warming of a cute friend. I wouldn’t even really say that close of a friend, because I’m not even sure my name was spelled right in his phone at this point, but he’s cute, so whatever. I received the invitation via Facebook (editor’s note: of course.) and it said that the party was from “8pm to 11pm”. So me being me, I have to work extra hard not to show up right on time, because only losers do that–sigh–and show up at a fashionably late time of 8:20pm. Or so I thought. I get there and I AM THE FIRST PERSON THERE. His roommate, was still in the shower at this point! Turns out he had been telling everyone that the party started at 9pm. So there I am, 40-fucking-minutes early to a party of some cute guy I hardly know. So then he asks me to help him take apart some frames so he can put some of his photos in them, so they can be hung up for the party…of course I help, because I am a decent person, and that is what decent people do. The his roommate gets out of the shower ( a girl, natch) and is asking me to light candles and put them around the apartment. What am I supposed to say? So of course I start lighting candles and placing them around, alternating colors, and such…and that’s when I realized this seemed all too familiar. My life had officially become a lame movie inspired by a horrible, horrible, book. He kept thanking me and was like, “I’m so glad you’re here.” You’re only glad I showed up unreasonably early, so you could get free labor out of me. I know how this game works. I’ve seen my fair share of movies!

I’m smart enough to know that while I may be experiencing a movie moment, those around me are not. I will not have a movie ending…Jake Ryan will not show up outside the church of my sister’s wedding (maybe because I don’t have a sister?) looking for me. Do you want to know why?  Because Jake Ryan is like 50 years old now.