Trainmance is a portmaneau for “train” and “romance”…it hasn’t really caught on yet, except for a couple of friends that I use it with, so right now it’s a protologism. Which according to Wikipedia is:

“A protologism is a new word created in the hope that it will become accepted. A protologism may be no more than suggestion of a word that might be used…The term protologism…was coined by Mikhail Epstein in 2003.“

My blog just got really smart for a second. I sort of attach “mance” a lot of other words, so long as those words are places where there is a potential to meet someone. Par example: planemance, linemance, barmance, storemance. I think you get the point. If there a two things that I am always on the lookout for it, it’s a trainmance or a storemance.

I was once on a flight from Seattle to New York–that had been delayed, natch–so there was plenty of time for the people who were waiting around in the terminal to make love connections. Of course, I was not one of those people. I just had to sit next to a planemance couple on 6 hour flight and they were awful. The boy looked like a weird version of John Travolta in his glory days and the girl looked like she had just stepped off of the “Rock of Love“ tour bus. I was trying to read, and they tried engaging me in conversation about my book. Trust me when I say, that the look on my face was nowhere near what anyone would call inviting. 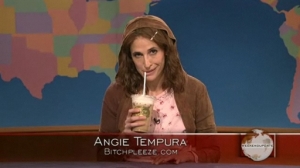 They drank the whole flight and were holding hands and snuggling as best as one can on a plane (I wouldn’t know!). I pretty sure that if they had been smart enough to find a way to boink each other in the bathroom, they would have done it. Well, about 30 minutes before landing, there was really bad turbulence, and I was like, “whatevs” because I’ve been on flights where the wing of the plane was struck by lightening and I survived…but this girl was cuddling up to her planemance, all scared. I almost threw up, and not from the turbulence. So when we landed, she looks at this boy and she goes, “Weren’t you scared? It was so scary!” and he goes, “I was, but I didn’t want to show it, because I didn’t want you to get more scared.” Literally. I couldn’t even make that up if I wanted to. Then they walked off hand-in-hand into the sunset to baggage claim. For the sake of humanity, I hope their “relationship” ended outside of the airport.

So, on my way home from work this evening, the train was crowded as usual, and I was holding on to one of the center poles along with four other people. I was minding my own bidness, but out of the corner of my eye, I can see this kid singing along to his iPod(I literally just typed “eyePod”). He looks a little something like this: 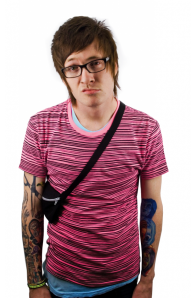 He has got to be one of the worst people ever.

But with a hat, scarf, and headphones… 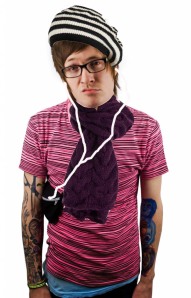 I'm not good enough at photoshop to 'shop in a winter coat.

Now, this kid was really going full force with his sing along. He was even dancing. Which looked a little something like this:

Now, I’m not one of those people that can ignore what is going on around me. Especially when it is as something as glorious as some kid going full force Britney’s Dance Beat on the train. Luckily, I was not alone in this. As I was watching this kid, I heard a boyish chuckle come from the guy next to me. We looked at each other. And we had a moment. Because we knew we were witnessing something special. We laughed together, at the absurdity of what we were watching. We were the only two people watching this! It was hard to miss folks; believe me. He was doing everything except dropping down to get his eagle on.

(and yes, I watched this video in it’s entirety.)

We talked about his dance moves and how we’ll never reach that level of skill. Then the train stopped. And they both got of the train…the entertainment and my trainmance. He said goodbye. I smiled. He was cute. Sort of bookish, but tall. And obviously with it enough to know that that dancing fool was a gem.

It’s one of those things where you hear about people who have met each other on a train, or something like that, and you wonder how it’s possible. Because I make eyes at pretty much every attractive guy on the train and nothing seems to work! I kid…sort of. There has got to be a way to meet people, organically. How does it happen?!

If he knows what’s good for him, he’ll post a missed connection about this tonight!

**Hipster picture Courtesy of Look at that Fucking Hipser