It’s Saturday night and I’m sitting in my apartment drinkin’ some beer and watchin’ Netflix, waiting for this bitch Irene to touch down in New York. I’ve got cookies, beer, and peanut butter to tide me over until the storm passes. I also got pizza. I am set. What’s that you say? None of that is healthy? Um, duh. I (I hear thunder!!! Sounds like Irene is close) am trapped in my apartment during a storm: all bets are off. This weekend doesn’t count in terms of any sort of dieting. Diet starts Monday!

As for my plan of texting available gentlemen in evacuation zones…well, that plan fell to shit. Apparently Bed-Stuy in a Hurricane doesn’t sound appealing to people. Well, their loss. We could have gotten drunk and eaten cookies while watching Netflix. Or we could’ve skipped all that and gone straight for the “adult entertainment”, if you get what I’m saying. Ha! What is wrong with these guys?

Anyways, I should probably get to the meat of this post (since there’s not meat in my apartment!) and introduce a new weekly feature. I figure that’s what the weekend is for. So far we’ve got the “This Week in Searches” on Fridays and “Vintage Crush” on Sundays. This brings us to Saturdays; favorite things! I am on my way to being as influential as Oprah…well, probably Tyra, but that’s neither here nor there. Now, some of these favorite things are probably going to be unusual, so that’s something to look forward to or not…depends on how you look at things.

On to the first of many of my favorite things: Bobby Hill squealing like a girl!

Bobby Hill is basically my spirit animal. He’s a little off, loves comedy, thinks he’s awesome, and wants to be special. Those are all things that I can relate to! I will admit that I’ve watched the above clip close to 50 times. I want to be as excited about something as Bobby is about growing roses.

He’s just so adorable. Also, someone needs to put me in touch with Mike Judge because I have a really amazing idea for a spin-off of King of the Hill revolving around Bobby. Basically, Bobby would be in his twenties, in either Chicago or NY trying to become successful doing improv comedy. UGH! It’s SO PERFECT.

Also, I’m so in love with the image of Bobby squealing, I’m thinking of getting it as a tattoo. Although, I’m pretty much a chicken and very fickle so I can’t imagine having anything permanent on my body…but if I did…it would definitely be this: 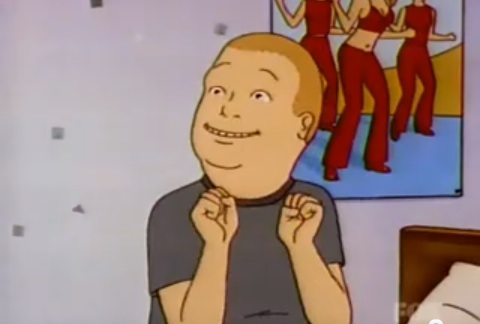 Obviously, I would be the coolest person ever if I got this as a tattoo.

See you all tomorrow! If I’m still alive and have power.