Welcome back to Vintage Crush Sundays! Today in honor of the fact that I am about to watch Out of Africa, I felt it was appropriate to have Robert Redford as this week’s Vintage Crush! You’ll see why, below:

I’ve been thinking about when the best time to have Robert Redford as a Vintage Crush would be for a while now.  A number of months ago, I got really into watching old movies from the late 60’s early 70’s. I started out watching some Barbara Streisand flicks and stumbled on The Way We Were. After that I pretty much added all of Redford’s movies into my Netflix Queue. Can I just say how much I love the movie The Way We Were? If you haven’t seen this movie, you need to right now. Everything about it is perfect! I love this trailer: REDFORD & STREISAND! TOGETHER!

Some basics according to IMDB:

Films/Television: He’s acted in 65 films, Produced 28, and Directed 9. He get’s around.

Awards: He won an Oscar for Best Director for the movie Ordinary People. No Razzie for this guy! He broke the Vintage Crush Razzie streak that’s been going on for like a month.

…and, to be honest, I think Robert Redford is too classy to ask. He’s got his Sundance thing and is a gentleman. However, if he did ask…it is Robert Redford, I’d be foolish not to!

I love me some Robert Redford because he seems like an all-around decent guy. The type of guy that would call you up after a first date to let you know that he had a good time! It’s probably true! He’s only been married twice and the first time was for 33 years. He has kids and grand-kids who aren’t gallivanting about town making fools of themselves. He also has a catalog where you can spend $3,495 on this…

and feel good about it because you are supporting the arts and the environment! The man is a genius. And a philanthropist. What is not to love? 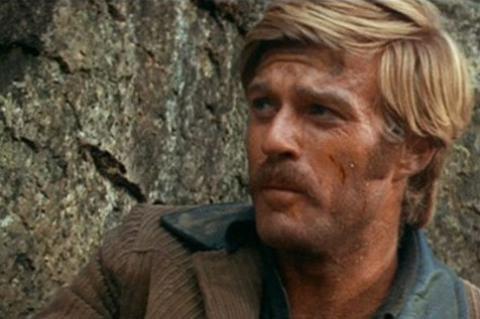 He also has the ability to grow a ridiculous mustache that doesn’t make me want to punch him in the face. That alone is reason enough to be named Vintage Crush.

Happy Labor Day everyone! Hope you get to enjoy a day off!