Things That One Should Not Do In Public

People should not clip their nails in public. Why? Are you seriously questioning this? What is wrong with you?

It’s disgusting, that’s why. And surprisingly, this is a thing that people do. Maybe it’s because I live in NYC and I take the subway and am surrounded by all types of people. People that never realized that personal grooming is best saved for the home. I even find women who do their makeup on the train obnoxious. It’s a hazard, you could poke your eye out with that eyeliner or rip out all your lashes as you’re trying to curl them. But I digress.

I was on the train heading to work the other morning around 9am and there was a woman standing, leaning against the doors just clipping away. Clip, clip, clip. That’s all you could hear. I’m not really a germaphobe, I mean, I’ve dropped food on the kitchen floor and dusted it off; but there is something about getting things that were once attached to a person, on your personage. Like when you have to clean your roommates hair out of the drain. It’s that same kind of grossed out feeling.

Why would any person think this is a normal thing to do? Do it in your home! Go to a nail salon! But seriously stop fucking doing it on the train! I don’t want your nail clippings in my hair. Or anywhere on me for that matter.

I think HBO needs to revamp their Taxicab Confessions show; they can have it take place on the subway platform late at night and just wait for drunk people to spill their guts. Hey HBO, do you have any openings in the development department? I’m available and chock full of ideas!

After my date and I parted ways in the subway on Friday evening (Saturday morning, I guess), I was waiting for the train, about to put my earbuds in, when a gentleman approached me. He was youngish–I later found out he was 24–drunk, and not dressed very well. I mean he was wearing ill fitting jeans, a black t-shirt with an open, long sleeved white, collared shirt, and ratty-ass boat shoes. There is nothing worse that ratty boat shoes with ill-fitting, light colored jeans. Do these guys not watch television or look in a mirror? He was white and tall. Very plain Jane.

He started talking to me about about his own failed trainmance (my words, not his! Although, lets make it happen people!). Apparently he had started talking to a girl while waiting for the train; my guess is that she was humoring him, much like I was doing; and when the train came, they got on separate cars. Never a good idea. Always get on the car they are getting on. That’s like Trainmance 101. In a last minute surge of boldness he decided to switch cars, but by the time he made it off one, the doors were closing on the other. He said something about how they put their hands up to the glass and looked at each other as the train pulled away. I threw up in my mouth a little bit. I told him it sounded a lot like the movie Sliding Doors. I’m not sure he understood what I was talking about.

We introduced ourselves, let’s say his name was Ace. I asked Ace if he was from Massachusetts because of his boat shoes. He had sort of a sloppy, WASP look to him. Turns out he is from Chicago. I hope Ace isn’t representative of the men in Chicago, just sayin’. Apparently he’s a special education teacher for Teach for America. It’s shocking to me how they will let anyone teach special education. I remember when I applied for the NYC Teaching Fellows four years ago they said that I would be qualified to teach kindergarten and special education. For some reason, I would want someone with more than a Bachelor’s in Fashion Design interacting with my special needs child every day. Maybe that’s just me. I certainly wouldn’t trust, boat shoes-sliding doors-drunk-Ace to teach my special needs kid. He could barely dress himself to go out on a Friday night! That does not bode well for his competence in the classroom.

He asked me if I had a boyfriend. He told me that I looked like the kind of girl that would have four boyfriends; to which I said “no”. Then he said three, then two, then one…I had to break it to him that sadly no, I wasn’t hoarding boyfriends. I kind of wonder what part of me gives off the vibe that I amass boyfriends like I do shoes. Maybe it’s my eyeliner. He asked me what train stop was mine and when I told him, he said, “no one’s getting murdered tonight”.  I’ll give Ace credit for that one, it made me laugh. Mainly because he sort of looked like he might have experience “forget-me-nowing” girls in bars.

We both got on the train and he sat next to me. Ace asked me if I was inviting him back to my place. I had to let him down gently. He said, “that’s too bad, you’ll never get to kiss these lips”. I replied, “You’ll never get to kiss mine and mine are way better”.  He said I was right and that it made him sad. That Ace was a real charmer. He got off at the stop before me and we said our goodbyes.

Oh Ace, if only you had looked like this 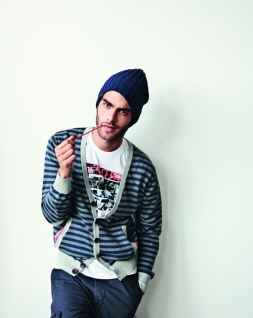 Oh, Jon Kortajarena, I have never wanted to be a straw so bad in. my. life.

then you could have come home with me.

Remember when that happened? That was when America’s Next Top Model was still good. I loved watching repeats on Vh1 during the summer.

Well, a similar thing happened to me today! Well, I didn’t fall backward, stiff as a board, but I did faint. On the subway on my way to work no less.

So my morning routine was normal, no hitches.  I had my Fage 2% Greek yogurt with fresh blueberries and blackberries and two turkey sausage links. The turkey sausage wasn’t mixed with the yogurt. That would be gross. My outfit was cute, green shorts and a gray tee; yes, that’s my idea of a cute outfit. My make-up was looking good, I was listening to Marc Maron’s WTF Podcast on my walk to the train as per usual. I love that podcast so much. It’s got so many layers to it. It has the ability to make me laugh and cry. Also, I find myself totally relating to Maron–I’m sure that everyone who listens to his podcast says the same thing. But you know, how when you discover something at certain point in your life and everything that is talked about is everything that you are going through? That’s how I feel when I listen to WTF. I need to send that man some baked goods.

I digress. So when the train finally comes, it’s a little more crowded than normal and it’s running at the pace of a snail because of signal problems. We ended up spending close to 10 minutes just sitting in one station. Eventually the train starts creeping along, I’m standing, holding on to the bar above my head, listening to my boy Maron, and I start feeling nauseous. I get that feeling where you are hot, but you also feel clammy. I’m thinking to myself, don’t throw up on the person sitting down in front of you, just make it to the next station and get off and just wait it out. I’m pretty sure I closed my eyes to try and center myself.

That’s really the last thing I remember until my vision starts fading in from black and I realize I am sitting on the floor of the subway car, kind of slumped onto the guy’s legs in front of me. I was so confused. How did I end up on the floor?! People looked concerned. A lady got up from her seat and the guy who I fainted on helped me up from the floor so I could sit. I was really shaken up by the whole thing. It took me a good minute or two to realize that I had fainted. Nothing like that has ever happened to me before. I think the guy must have caught me enough when I fainted, so I that just crumpled to the ground instead of taking out a whole bunch of passengers on my way down. I kept apologizing to the him, but he just kept asking me if I was okay. He was very nice. Too bad he wasn’t hot! Well, more like too bad he wasn’t previously traveling with his girlfriend who got off a few stations earlier. I faint and the universe can’t even give me the gift of a hot guy catching me? What kind of stupid romcom is the universe writing for me?!

One older lady handed me some tissues. A woman around my age asked me if I wanted her to the get an MTA agent; I declined. Another lady kept checking up on me and when I finally got off at the West. 4th St. Station she made sure I was okay. People were very nice. I was kind of surprised. You see a lot of videos of stuff getting ignored on the subway, so it’s nice to know that there are people willing to help someone in need.

I obviously decided not to go to work and took a cab home. When I got back to my apartment, I WebMD’d myself. I’m blaming my fainting on “intense emotional stress”. I have my reasons. I wish it were drugs and alcohol!

At least I was able to provide some entertainment for the morning commute. I also got a blog post out it. Today wasn’t so bad, I guess.